The Sicilian Region promoted the Termini Imerese’s Carnival: the event is now part of the Great Events of Sicily for the 2019. The Carnival, taking place in the province of Palermo, is one of 45 Sicilian events that give value to the territory, contributing to make the place a tourists’ attraction in Italy and abroad.

This is surely a good news for our friends from Palermo, who can be proud not only to have wonderful places, landscapes and monuments, but also to promote the territory through important cultural events.

Finally, this Carnival event is one of the most important carnivals in Sicily, along with the one of Acireale, in the province of Catania.

Local people declared that the papier-mâché makers are already getting ready for the 2019 edition. Even the various associations that contribute to the realization of the event, are just putting to work.

One of the most ancient Carnivals in Sicily

The Termini Imerese’s Carnival is the main heir of the great Carnival in Palermo.

This event dates back to 1876: it is one of the oldest Carnivals in Sicily.

The festival has spread in this town, in the province of Palermo, thanks to the Napuliti Family, a noble Family of Neapolitan origins. It is said that they cultivated grapes and owned various vineyards: hence the tradition of drinking wine during the Carnival in Termini Imerese. 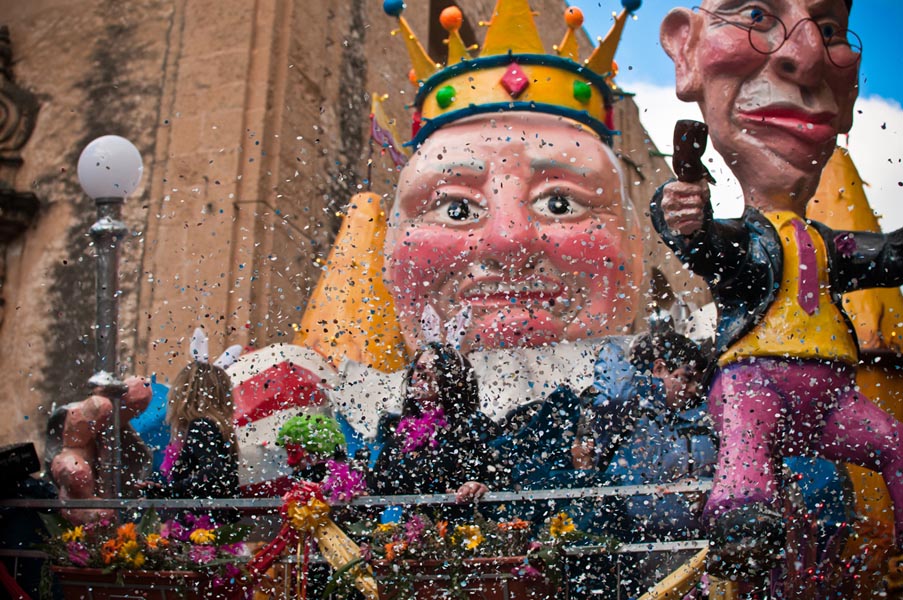 The papier-mâché carnival floats are the main element of the Carnival in Termini Imerese, as well as the one in Acireale. The festival includes a big parade with floats, music, lights, mask and confetti.

The emblematic mask of the Carnival represents a male figure; this mask is called U Nannu (which means the grandpa, in the Sicilian dialect). As the tradition wants, in fact, the festivities open with the consignment of the keys of the city by the mayor to the Nannu and Nanna (the granny), the female counterpart: to be exact, this is the only traditional carnival mask in Sicily, representing a woman.

The Nanna symbolizes the Lent, the fertility and the continuity of life after death. On the contrary, the Nannu must be purified: on Mardi Gras, at the end of the festivities, people burn the mask, in order to wish a happy new year.

In 2019, the Carnival of Termini Imerese will take place from 24th February to 5th March 2019, at the city center. Mark these dates if you want to join one of the great events of Sicily in 2019!

Termini Imerese: one of the oldest villages in Sicily

Termini Imerese is a very ancient town. Various sources report that it has been inhabited since prehistoric times. After its destruction by the Carthaginians, it was rebuilt in Roman times. Thanks to Romans, in fact, the town owns various old monuments.

Carnival is not the only tourist attraction of this town. For example, there are lots of Churches, built in different ages. There is also an amphitheater of Augustan origin, considered a particularly appreciated point of interest. There are even some aqueducts of Augustan origin, and even the one that is best preserved in the Sicilian region, is located in Termini Imerese. All these elements contribute to enrich our territory.

If you are planning your holidays in Sicily for 2019, during the Carnival period, don’t miss the chance to join this colourful event, especially if you love fun and cheerfulness.

Then, you could visit our magnificent Palermo, to discover Baroque and the wonderful mosaics of Monreale.