Saint Agatha festival is celebrated in Catania and it is also the most famous religious festival in Sicily. This is also considered the third festival most important in the world, after Semana Santa of Siviglia and Perù’s Corpus Domini Festival.

It commemorates the city’s patron life, Aghata of Sicily. 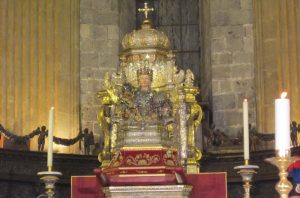 It takes place every year, from the 3rd until 5th of February and August 17th.

In addition, particularities that it let be know are:

Furthermore, during this moment of worship, you can find typical sweets. The most famous are “casatedde di Sant’Aita” and “olivetti“. These sweets represent symbols of Saint’Agatha. Both made with marzipan.

In conclusion, if you are in Catania you can’t miss this big festival, where faith and traditions wear the city and its inhabitants.

At 5 am in the Cathedral starts the Mass after the exit of the Saint from her sacred cameretta. Brought by believers, Saint’Aghata exits from the church and starts the route around the city.

In the morning of February 5th, she will come back to the church. After the Mass at around 6 pm, brought by believers, she will start the second rout around the city.

In conclusion: do you need a transfer to reach your accommodation or Catania during Saint Aghata festival? Visit our website www.sicilydaybyday.com or contact us at 0039 3487133994!