Mount Etna is back in action!

It was long awaited, and in the end Mount Etna delivered!

Her Majesty Mount Etna, the highest active volcano in Europe, had been silent for more than 18 months. Only in the past weeks there had been some rumours, some strombolian and intra-craters activity.

Mountaineers, volcanological guides and scientists were alerted that maybe something bigger was going to happen. And during the night between August the 23rd and 24th the activity reached its peak.

From the south-eastern crater lava started erupting on thursday late afternoon. And Mount Etna did not stop until early morning of the following day. From small volcanic bomb and ashes, the crater passed to erupt lava fountains up to 100-150 meters high during the night.

After a while the lava turned into a slow river, that took his path towards the “Valle del Bove”, far from any human presence. 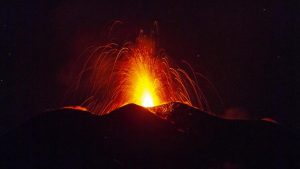 On the 24th early morning there has been the last consistent throwing of lava and ashes, before the activity slowly ended.

Meanwhile the  touristic presence around the craters had been forbidden over 2700 meters a.s.l. on the south side, and over 2800 meters on the northern side.

“The eruptive phenomenon – they explain from the NIGV – is still in full evolution and is constantly monitored by the Etneo Observatory of the National Institute of Geophysics and Volcanology”.

“Mom Etna” as the locals call Mount Etna, is back in action. And we are thrilled to see the way she will amaze us this time.

If you want to enjoy the possibility to see the craters from a closer point of view, visit our website for all our