Discover Palermo, the capital of Sicily with its millenary history, and Monreale with its stunning Gothic Cathedral starting from Taormina 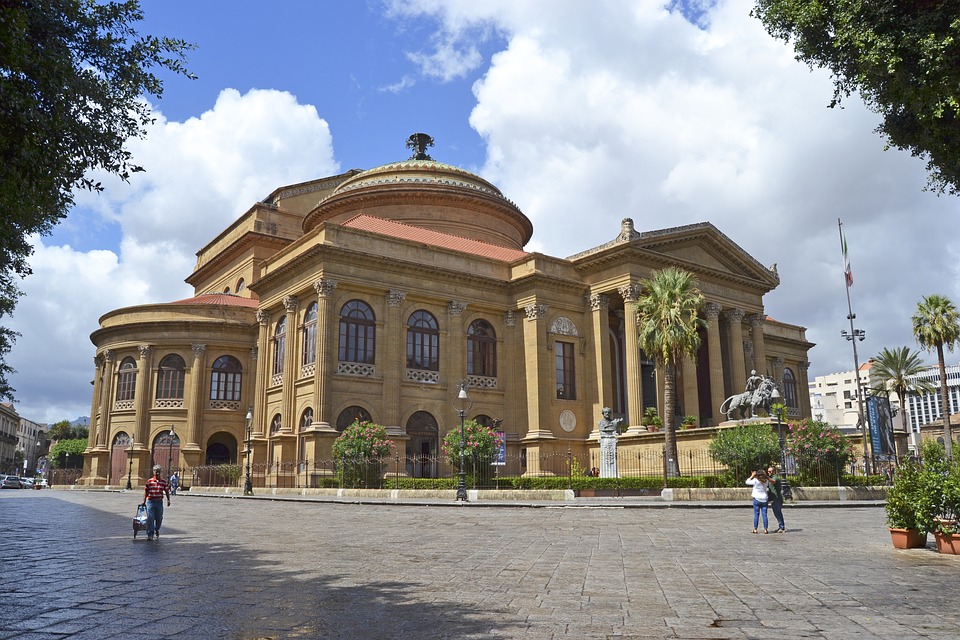 Discover Palermo with its millenary history, and  Monreale with its stunning Gothic Cathedral

The full-day tour Palermo and Monreale from Taormina will let you discover and admire the richness of the Gothic-Arab era in Sicily.

First stop of the Tour Palermo and Monreale will be Palermo. This city is not only the capital of Sicily but also one of the most ancient cities of Europe! Indeed, Palermo was originally founded by the Phoenicians and then dominated by Arabs, Norman, French, Spanish. All these different dominations made Palermo a melting pot of cultures, styles and different architecture. For this reason, the city is one of the many Sicilian UNESCO World Heritage Sites; every year thousands of visitors enjoy a tour in Palermo.

Once in Palermo, we will walk through its chaotic, vibrant, and energetic streets. Enjoy the scents and the flavours of the Moroccan-style Market « A’ Vucciria« ; then we can marvel at some of the incredible buildings of the city, each testimony of the cultural variety of the city. The incredible Arab-Norman Cathedral and the many other ancient churches; the Palazzo dei Normanni, the ancient royal palace of Palermo, which is today the seat of the Sicilian Regional Assembly. Inside, this palace is also possible to admire the enchanting Cappella Palatina, a true jewel of the Unesco site of the city.

For lunch, we’ll offer for free a filling snack with the typical street food of Palermo and Etna wine. Or, if you prefer, you will have one hour of spare time to enjoy lunch in the nearby.

In the afternoon we will visit Monreale. Since the foundation of the city, it became quickly a powerful and important village because of the Arab-Norman Cathedral. More than 6300 squared meters of dazzling Byzantine mosaics depicting biblical scenes on a gold background will amaze you. This Cathedral has been designated as one of several buildings listed in a UNESCO World Heritage Site, a group of nine inscribed as Arab-Norman Palermo and the Cathedral Churches of Monreale.

At the end of the tour Palermo and Monreale from Taormina, we will start the return to the starting points. We’ll be back in Taormina at around 7 pm.

Palermo, is the capital of both the autonomous region of Sicily and the Metropolitan City of Palermo. The city is noted for its history, culture, architecture and gastronomy, playing an important role throughout much of its existence; it is over 2,700 years old. Palermo is located in the northwest of the island of Sicily, right by the Gulf of Palermo in the Tyrrhenian Sea. The city was founded in 734 BC by the Phoenicians as Ziz. Palermo then became a possession of Carthage. Two Greek colonies were established, known collectively as Panormos or « All-Port »; the Carthaginians used this name on their coins after the 5th century BC. As Panormus, the town became part of the Roman Republic and Empire for over a thousand years. From 831 to 1072 the city was under Arab rule during the Emirate of Sicily when the city first became a capital. The Arabs shifted the Greek name into Bal’harm, the root for Palermo’s present-day name. Following the Norman reconquest, Palermo became the capital of a new kingdom (from 1130 to 1816), the Kingdom of Sicily and the capital of the Holy Roman Empire under Emperor Frederick II and King Conrad IV.

Monreale is a town and comune in the Metropolitan City of Palermo, in Sicily, southern Italy. It is located on the slope of Monte Caputo, overlooking the very fertile valley called « La Conca d’oro » (the Golden Shell), a production area of oranges, olives and almond trees, the production of which is exported in large quantities. The town, which has a population of approximately 39,000, is about 15 kilometres inland of Palermo, the regional capital. Monreale forms its own archdiocese and is home to a historical Norman-Byzantine cathedral. This has been designated as one of several buildings named in a UNESCO World Heritage Site, a group of nine inscribed as Arab-Norman Palermo and the Cathedral Churches of Cefalù and Monreale.