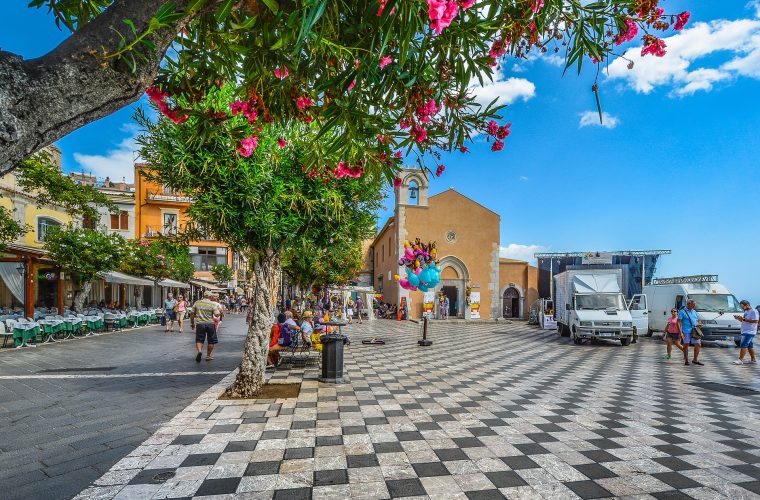 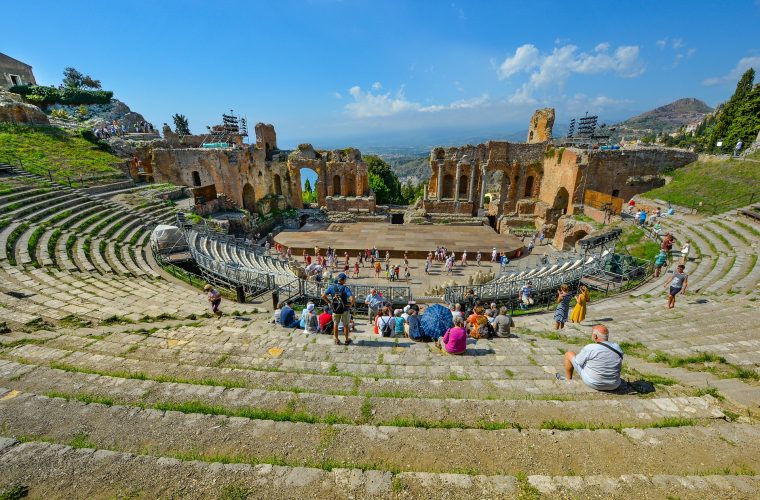 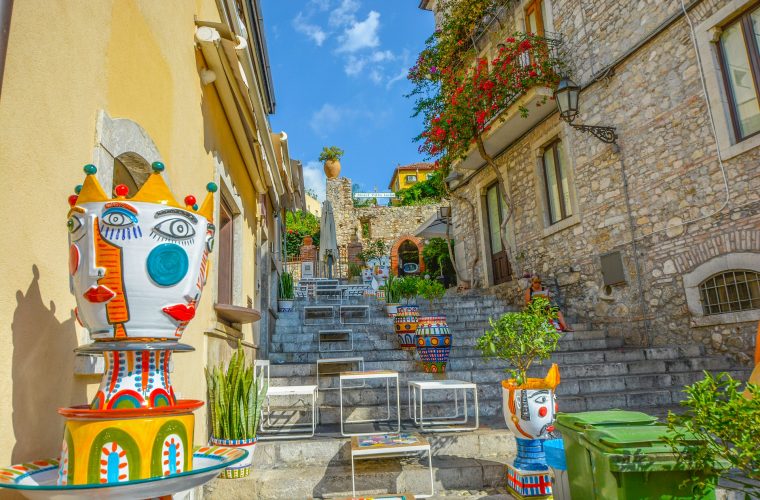 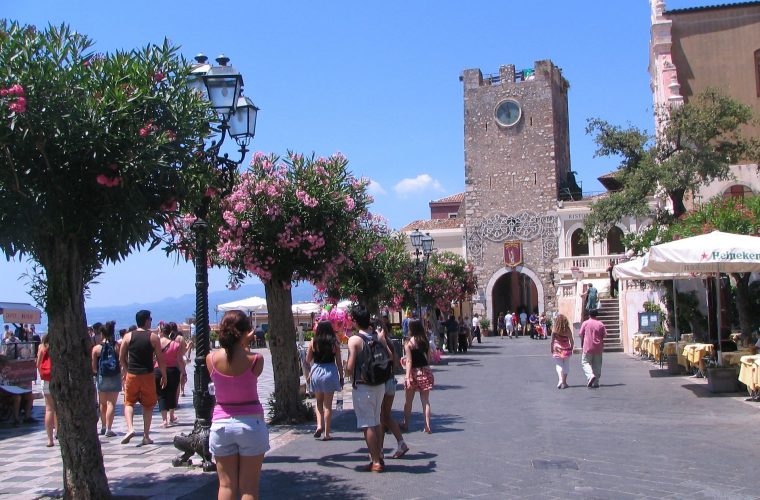 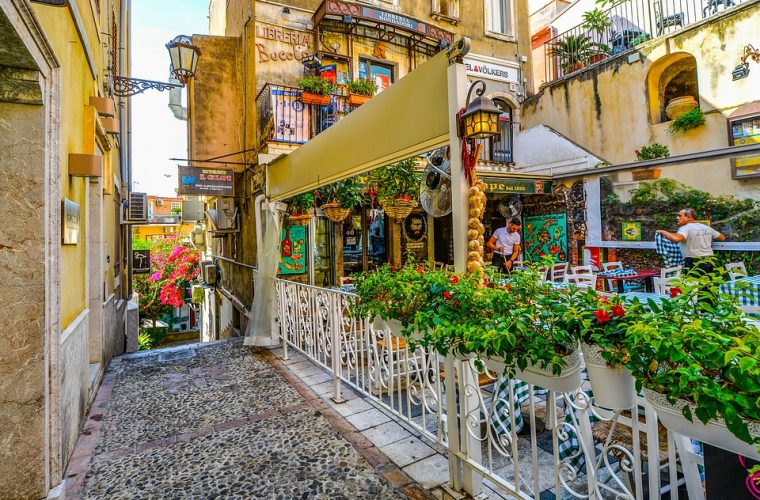 Visit the beauties of these three famous towns in Sicily, starting from

For the Taormina Savoca and Castelmola Day Trip we offer free service of pick-up at your accommodation in Catania or at a close meeting point, with comfortable 8 seats vehicle.

First stop Taormina Savoca and Castelmola Tour: Our first town of the one day tour will be Savoca, a characteristic medieval town. We will visit one of the fascinating catacombs of the “Cappuccini Convent“ which hosts the mummified bodies of monks and nobles from Savoca.

The Bar Vitelli is the highlight of the tour: it became famous in the scenes of the “The Godfather” movies, here you can taste a delicious Sicilian granita and look at the pictures taken during the shooting of the film.

Second stop Taormina Savoca and Castelmola Tour: Our second town will be the majestic Taormina. You can here visit the Greek Theatre (ticket is not included in the price), one of the major ancient sites in Sicily, which offers a unique panoramic view of the sea and Mount Etna.  Walking along Corso Umberto, you can visit the Cathedral and enjoy the stunning view of Capo Taormina bay.

Here in Taormina you will enjoy a free snack: we’ll offer for free a rich tasting of Sicilian typical products, with water and red wine from Mt. Etna. Or, if you prefer, you will have one hour of spare time to enjoy lunch in the nearby.

Third stop Taormina Savoca and Castelmola Tour: Next stop will be in Castelmola, a characteristic medieval suburb suspended between the sky and the sea. Castelmola is considered a big balcony on Taormina, also here you will enjoy a fantastic view of Etna on one side and the Ionian sea on the other. From Sant’Antonio Square you’ll begin your walk in the alleys. Around the small streets it’s possible to see small shops that sell souvenirs, laces and embroideries made by locals women. Finally the last stop in Castelmola  is the visit of the “Bar Turrisi”, a very typical bar for a good coffee or a tasting of almond wine, typical Sicilian dessert wine.

At the end of the visit of Taormina town, you will get back on the minivan.

The return to Catania is expected at approximately 6pm.

Entrance ticket to the historical sites

Taormina and surroundings
From
85€
per person

Departure from Syracuse has an additional charge of 25€ per participant

Savoca is a village perched on a rocky  hill. It is also named “country of seven faces” and “fertile land of ingenious minds”. City of art, since 2008 it is part of the most beautiful villages in Italy.

The main places of interest are the Convento dei Cappuccini, where there is a crypt made in the seventeenth century where the embalmed bodies of some notable people from the past are kept and exposed, and the Palazzo Trimarchi, once residence of the wealthy family of the same name, whose ground floor hosts the famous Bar Vitelli, set of a scene of the movie “The Godfather” (1972) by Francis Ford Coppola.

Savoca preserves, in its historic center, the ruins of an ancient medieval synagogue (the Jewish community was present in the territory until 1492). The ruins of the synagogue of the Jews of Savoca are pretty close to the Church of San Michele, right at the feet of the hill where the Pentefur Castle stands.

Taormina is a famous tourist town, destination of artists, writers and intellectuals (including Goethe and Truman Capote) too. Particularly loved not only for landscape beauty and fantastic scenery, but also for its “sweet life”, permissiveness and transgression.  Corso Umberto, the main boulevard, houses many shops and boutiques.

The ancient theater of Taormina is probably of Hellenistic origin and, after centuries of decadence, since the 1950s it has been used as an open-air theater to host theater performances, concerts, David di Donatello’s award ceremonies and symphonic concerts, from the Opera to the ballet. Since 1983, it is home to Taormina Arte, a show event that takes place all year round in summer, and Taormina Film Fest. The theater was also home to some footage of “The Goddess”, a Woody Allen’s movie.

Castelmola is another small town among the most beautiful villages in Italy and it is located on the top of a rocky hill above Taormina. The Castle of Mola dates back to Norman times and for centuries it was a fortress of the Peloritan defensive line made up of the mansions of Milazzo, Ficarra, Tripi, Castroreale, Castiglione and Francavilla; It has always been representing the neuralgic point to be taken over by the various conquerors in order to take control of the territory .

The famous central square has a mosaic floor in lava stone and from there you can admire the Ionian coast. Another tourist attraction is Bar Turrisi, a very bizarre spot in Castelmola!

During the Christmas period, through the close collaboration between institutions, traders and volunteer citizens, Nativity cribs are set up all over the town, hosting the most varied artistic creations made with different materials.