Chronicle of a recent fame, but thousands years old

A lot has been said and done about Etna Wine these past few years. High praised, prizes winner and worldwide awarded. Etna Wine today is a trend, in Sicily as well as the rest of Italy and abroad.

But what made Etna Wine so desirable, to let us salivate by just dreaming of tasting it?

The answer to this question, as many other things in Sicily, dates back in time.

From the Bronze Age to the Middle Age

It is said the Greeks brought vines cultivars in Sicily. Yet, some foundings from the Phoenicians and other previous cultures, suggest at least the existence of the plant before the Greeks.

What the Greeks did was importing news and innovation. They introduced the act of pruning, the varietals choice and the tree cultivar, other than innesting some original grapes from their motherland.

Then the Romans made the best out of wine, making it one of the top products of the Empire. Even said that “Mamertino” was Caesar’ favourite wine.

During Middle Age wine production decreased up to the Arab domination in Sicily. But with the Aragonesi first, and especially the Borbone later, Etna Wine came back to enrich the tables of the Old and New World. It was in fact at the end of the 18th Century that the first great Sicilian Wineries were born, Florio above all. 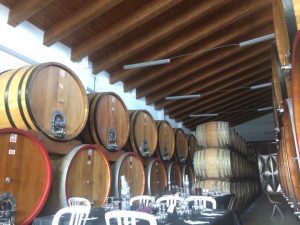 Then in the middle of the 19th century the so called “Wine’s bane” arrived, “Phylloxera”. An insect coming from America that destroyed almost the 80% of all the european vineyards. Consequences were catastrophic, as the wine production came back to life only at the middle of the 20th century.

Thanks to the height and the cold temperatures, some Etna vineyards survived the epidemy. But the Etna Wine, when the strong bodied Sicilian wines were mostly used to cut the great and esile wines from north Europe, couldn’t be appreciated

Only at the end of the ‘90s things started to change. With the contribution of new Sicilian, Italian and foreign investors, sicilian wines were having their own fame. So Nero d’Avola, the dominating red grape, was not enough no more. New flavours are seeked now, in harmony with the greatest international grapes

Here is where the recent Etna Wine luck comes from! The Nerello Mascalese or Cappuccio grapes, have those elegance and softness characteristics from the greatest red wines. The Carricante is an autoctone grape whose freshness fears no comparison even to the greatest german Rieslings.

These two grapes gave life to the Etna DOC, the eldest in Scily, and today they make the luck of almost 150 wineries on the slopes of our volcano.

Sicily Day by Day could not ignore this richness of our territory. That is why we chose to offer you an excursion dedicated to the Etna Wine!